If the title “Queen of Living Bloggers” existed, no one would be more entitled to it than Jules. The Berliner started her blog during her first pregnancy, in 2008, and today Herz und Blut (which translates to “heart and blood”) produces design and lifestyle content, and collaborates with brands such […]

If the title “Queen of Living Bloggers” existed, no one would be more entitled to it than Jules. The Berliner started her blog during her first pregnancy, in 2008, and today Herz und Blut (which translates to “heart and blood”) produces design and lifestyle content, and collaborates with brands such as Louis Poulsen, Vitra, and Freifrau. “The name comes from the early blogging days. It’s a folly of youth, but tribal tattoos are fashionable again,” Jules explains with a laugh.

“At first, Herz und Blut—as the name suggests—was just a personal blog,” she says. “Then I started photographing people at home or in their studios.” Jules comes from a village near Oranienburg, in the north of Germany, and in 2006 she moved to Berlin to study social and business communication, where she met Alhadj, who works as a logistics manager. She found her calling in photography—“even if I never dare to call myself a real photographer,” she admits.

Alongside her studies she worked “in the tough school of retail.” Then, with the birth of their son, the student apartment Jules and Alhadj lived in became too small. Still, the family wanted to stay in the Wedding district. “The neighborhood is often ridiculed. We love it. This is where the world meets,” Jules says. For five years she has been able to make a full-time living from Herz und Blut and the associated creative studio Maison Palmė, both of which Jules runs with her sister, Maria Villbrandt, and Wilkin Schröder. The studio is just a few streets away, and Justus’s school is also in the neighborhood. His room is hidden at the end of the hallway, from which the bedroom and bathroom (“our next project”) lead off. Jules points to a crack in the ceiling of her son’s room. “We were going to rip out the paneling and…well. Maybe you shouldn’t do everything yourself after all,” she says with a laugh.

“Sometimes I’d like to have an extra room, to work in, for my books and magazines—they’re currently stored in the bedroom and living room. At the same time, I realize what a luxury it is to live in almost 100 square meters [1,000 square feet].” What’s more, the family has a rent-controlled apartment. You don’t give up an apartment like that. “I like things to have their fixed place,” Jules says. She has long since found hers, here, in the heart of Wedding.

Sun Aug 1 , 2021
The Underground Railroad exhibit at the Rokeby Museum in Ferrisburgh. Rokeby courtesy photo The Rokeby Museum urgently needed repairs to its 200-year-old home in Ferrisburgh. PC Construction Co., an employee-owned business in South Burlington, was looking for a good project for its annual plan of community giving and involvement.  And […] 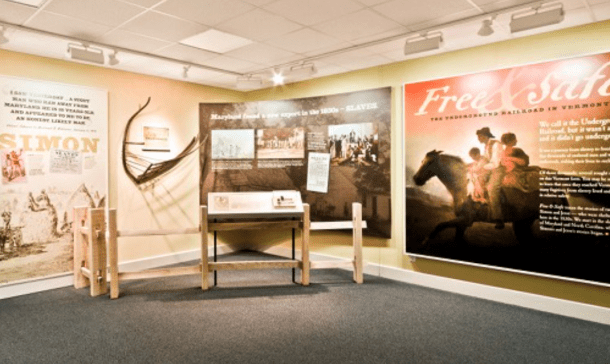