The average Filipino spends most on decor for their living and dining rooms, according to Householdquotes.co.uk. Read this in The Manila Times digital edition. THE interior design industry experienced a boom at the onset of the coronavirus disease 2019 (Covid-19) pandemic. The health crisis triggered a lifestyle change as people […]

The average Filipino spends most on decor for their living and dining rooms, according to Householdquotes.co.uk.

Read this in The Manila Times digital edition.

THE interior design industry experienced a boom at the onset of the coronavirus disease 2019 (Covid-19) pandemic. The health crisis triggered a lifestyle change as people found themselves studying and working from home. Thus, homes were converted to make them more conducive for work and study.

Based on a study by Householdquotes, the Philippines is one of the countries that spends the most on home décor, spending P7,453.83 ($147.74) per person or P7,500 annually on average. Out of 150 countries, the Philippines might not be in the Top 10, it is still well within the 50s range. Switzerland tops the list, followed by Hong Kong (the highest in Asia), Norway, Iceland, Sweden, Denmark, Australia, Japan, Israel, and Canada.

According to Householdquotes, “Interior design was all the rage last year as the pandemic wore on and people were study inside. But which countries spend the most on interior design annually, and which rooms are getting the most attention.”

Because of the pandemic, Filipinos have turned to improve their homes as they have to endure lockdowns that have kept them at home. Such improvements may range from repainting to remodeling, usually done by homeowners themselves, who would not afford the services of an interior designer.

Besides turning their homes into an office or study area, homeowners wanted to recapture the ambience of the outdoors, something the pandemic has deprived them of as they are forced to stay in their homes. Thus, there is a need to turn the drab parts of the home into something attractive and relaxing. 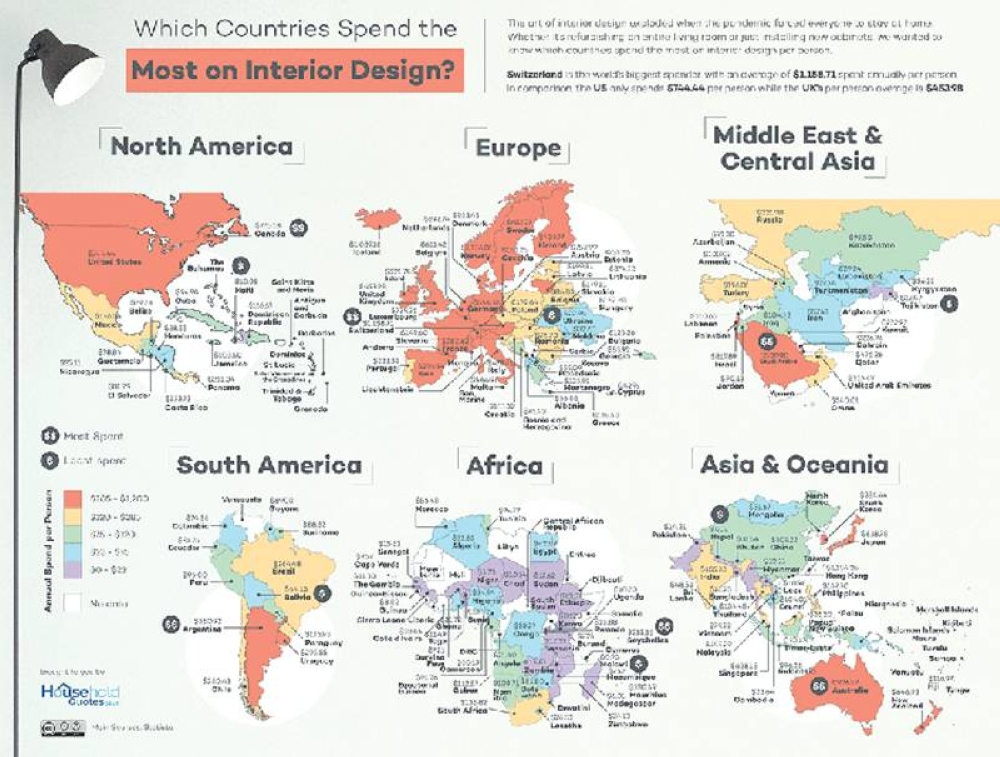 An infograph showing how much countries spend on interior design. The Philippines ranks among the top 50 in spending per person. SOURCE: Householdquotes.co.uk

This trend, in turn, has seen a boom in the furniture and home improvement businesses.

Dekko, a Manila-based custom furniture shop, has been taking orders virtually non-stop since March. With so many orders, the store’s staff are working overtime. It is an exceptional situation amid the pandemic, which has adversely impacted the economy. Most businesses either had to cut staff or temporarily shorten work hours to reduce costs.

“If we didn’t limit our [order] capacity, this year would be the highest [in terms of sales],” said Dekko’s owner, Nathaniel Geluz.

The pandemic has had a positive impact on Wilcon Depot. The hardware chain is expanding, having most recently opened a new branch in Laguna province. The company reported a 10-percent year-on-year revenue growth in the third quarter.

Due to the pandemic and the resulting lockdowns, Filipinos have turned to online shopping more as most physical stores have closed or have become inaccessible. This has made an impact on the home improvement and furnishing sector as several customers have bought their home improvement needs and furniture exclusively online.

According to data consulting firm Store Leads, “home and furniture” has risen to the third-highest category by number of stores on the e-commerce platform Shopify in the Philippines. More than 2,000 brands within the industry are using the platform to sell goods online.

Los Muebles, a furniture shop based in Pandi, Bulacan, has already achieved its best sales year, ever since it opened in 2017.

Los Muebles CEO Jelsa Roldan said it helped that the company established its online presence early: “So even when the country was in quarantine, customers did not need to go to the shop to order or check our products.”

Even Blims Furniture has entered the digital age to become more accessible to customers in need of their merchandise as their stores and showrooms have closed down due to the lockdowns.

“At the height of the quarantine in the second quarter, we had zero revenue, as all of our stores were closed,” said Blims Furniture CEO Gregory Lim.

“But when we started to launch our e-commerce sites, our online sales immediately enjoyed three-digit growth, month on month,” said Lim.

Indian interior designer Shobhan Kothari has foreseen that “aesthetics will become more pragmatic with a keen and heightened sense of luxury.” Because of this, many will be encouraged to improve interior design and architecture, which in turn, will promote well-being, according to Kothari.

Wed Aug 11 , 2021
“The designs appeal to pet owners who need products that keep their animals safe, but who also appreciate an elegant aesthetic,” said Tracey Butler, an interior designer and founder of Clear Home Design. “Pet barriers, crates and feeders can be great looking,” she said, “and pets  certainly don’t need to […]