One of the founders of the glamping haven in Fethiye’s Kabak Valley, U.S. native Chris Shaw has become an expert on ecological building techniques and resourceful lifestyle practices; or, in other words, how to live “off the grid” in Turkey. His newest project, “The Mandala House,” is literally a spectacular, […]

One of the founders of the glamping haven in Fethiye’s Kabak Valley, U.S. native Chris Shaw has become an expert on ecological building techniques and resourceful lifestyle practices; or, in other words, how to live “off the grid” in Turkey. His newest project, “The Mandala House,” is literally a spectacular, completely self-sufficient villa set in an olive grove in the forested mountains of a village above Seferihisar, a beloved town and holiday destination in Izmir.

California native Chris Shaw came to Turkey as many of us expats do, traveling the world only to end up as an English teacher in Istanbul. However, with the lifelong dream of opening up campgrounds in nature coupled with traveling to Turkey’s Kabak Valley and finding a plot of land of his own, Chris was able to venture out of the big city and pursue his true area of interest: natural building techniques. What resulted was Reflections Camp, a bungalow and campsite at the entrance of Kabak Valley, a spectacular slice of nature that is a forested valley leading from the Lycian Way stop of Faralya into a pristine cove, complete with a grotto-like sea cave. With no development allowed in this protected area, where once the only form of transportation was hiking along a windy path down the valley alongside loaded donkeys, Chris had to employ sustainable methods to create his campsite. At the time, his was one of just three that inhabited the region, whereas these days there are dozens.

To build something ecological from scratch had been Chris’ dream for a long time, although he originally envisioned it happening somewhere in Central America. Alas, after the 9/11 bombings in the U.S., Chris decided to stay in Turkey and set out in October 2001 to go looking for a place – which turned out to be Kabak Valley. By January 2002, he moved out to the area with just two tents and began constructing his camp. It was at Reflections Camp where he made the first earthbag project in Turkey. In fact, seven of the rooms were earthbag construction, as were the decks, and the remaining five rooms were wooden bungalows. Chris’ camp became a popular stop for expats and foreign visitors alike as Kabak Valley continued to grow exponentially in popularity over the years.

After spending over a dozen years at the helm of this camp, Chris decided to move on to new horizons and projects, which led him to buy the 5,600 square meters (1.4 acres) of land near a village called Beyler, located less than 20 km (12.4 miles) from Izmir’s Seferihisar district that would become “The Mandala House” project, a unique example of how to live luxuriously “off the grid” in Turkey. Operating on solar power, “The Mandala House” is a circular-shaped home with a loft and a 32-square-meter pool as well as a traditional yurt that serves as a guest house. In all, there are two bedrooms, two bathrooms and a fully equipped kitchen that leads into a living room with a fireplace and custom-made furniture for a total living space of 160 square meters.

The house itself, which is in the shape of a circle with an 11-meter circumference, was built using a concrete framework, red bricks for walls and perlite for insulation. The interior kitchen area and living room are actually designed in the shape of the yin yang symbol. The bedroom upstairs is an open-space loft. There is also travertine stone flooring throughout the home and outdoor space. The house is set on a 500-square-meter area encircled by 450 meters of natural stone retaining walls. Surrounding the house on the land where it was built is a 120-tree olive grove as well as wild pear and pine trees. The outdoor space also houses a 35-square-meter traditional goat-hair yurt and an outdoor bathroom for guests. In all, including the spacious living room, the homestead comfortably sleeps eight.

What makes “The Mandala House” especially unique is all of the intricate and beautiful details Chris himself has put into various structural elements in the house. The reciprocal frame design conical roof is just one of them. With the likes of just one other example seen before in Japan, Chris tells me that this unique roof structure consists of wooden poles resting on one another “in infinity,” explaining that “it doesn’t start and it doesn’t end.” The roof also has a spectacular skylight to both brighten the space in the day and from which to watch the sky at night.

Chris’ inventive woodwork can be seen throughout the house and outdoor living space. He built these structures utilizing branches and harvesting the Karaçağlı bush, which is a relative of oak and grows on the land. Chris explains that if you cut the branches they regrow within a year. “The Moon Gate,” which is the circle-shaped entrance to the abode, is yet another impressive display of artistic woodwork that truly makes this house one-of-a-kind.

But in addition to all of the painstaking and intricate work that has gone into creating this home, the fact that it is entirely self-sufficient is yet another reason this villa in the hills of Seferihisar stands out. The house produces its own electricity through a 22kw solar panel energy system with batteries. For cloudy winter days, there is also a 15 kW generator as a backup. Chris wanted the home’s amenities to function at the same level a normal home would, in other words, for those in the house to be able to use the oven and take a hot shower at the same time, which he successfully achieved.

As for water, Chris shares that he has collected over 100 tons of water from the roof design alone. In the design, rainwater is collected on the roof and diverted into a main underground cistern from where it is pumped up and filtered before entering the home’s faucets. In the season’s lesser rain, a tanker delivers water to the house on site.

The building of this project would have been an entertaining topic for the popular house building show “Grand Designs,” but for me what comes to mind is its offshoots in the form of “Off the Grid” reality television shows in which families give living fully immersed in nature a go. Luckily, “The Mandala House” is available to host such adventures for anyone seeking out the ultimate and luxurious “off the grid” experience in Turkey as it is for rent on Airbnb as well as for sale. For Chris, while this was a labor of love, it was always intended as a creative endeavor to serve others.

Chris also has a blog entitled “Natural Design and Building by Chris Shaw” where he shares some of his building experiences and stories from his time at Kabak Valley. He also posts on how one would go about building a home in the countryside in Turkey. And on that note, I took the opportunity to ask Chris his top tips for someone looking to build a home in nature or one that is self-sufficient in Turkey’s rural areas.

The first step is ensuring that any land you intend to purchase is not located in an archeological or environmentally protected area. To build legally, land has to have a specific number of meters adjacent to a cadastral road. Each province can differ and so the most crucial step to take is to check the land’s building capacity, in Turkish “Imar durumu” with the local municipality. It is also important to have a mapping specialist from the municipal cadastral office to properly designate the borders of the property in question. In addition, to receive residential permission for any build, approval must be granted on a project signed by an architect.

Sun Aug 15 , 2021
The inside of the temporary Ocracoke School in modular units. The school is looking to fill a few teacher positions and those new teachers will need housing. Photo: C. Leinbach By Sara Teaster Last year, a group of concerned Ocracoke residents began discussing affordable housing.  After two meetings of the […] 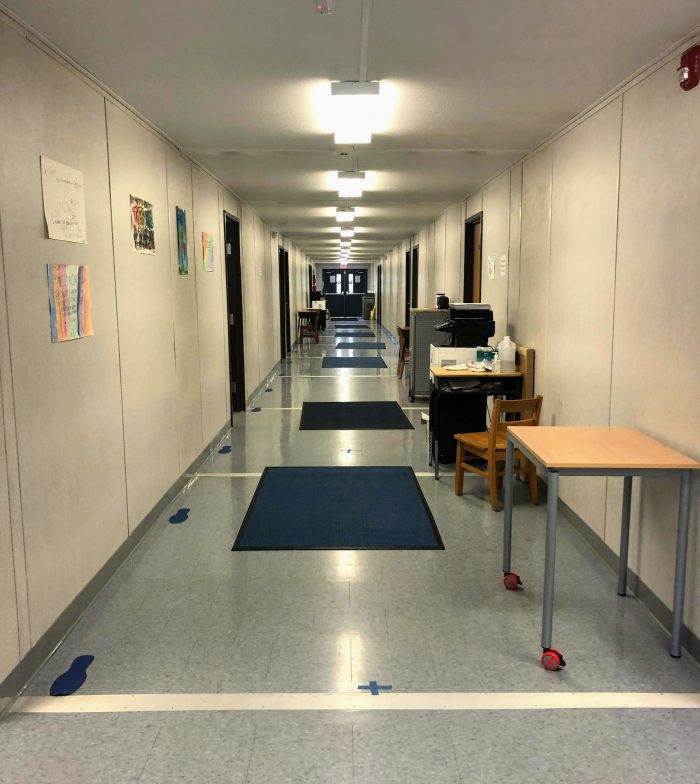