When Don Wienhoff, the trustee of the Kreher Foundation, starting meeting with Lincoln Land Community College personnel several years about how to utilize a gift, initial discussion centered around some scholarships, recruiting material and more classroom equipment. Wienhoff asked them ultimately to dream bigger. Officials cut the ribbon on that […]

When Don Wienhoff, the trustee of the Kreher Foundation, starting meeting with Lincoln Land Community College personnel several years about how to utilize a gift, initial discussion centered around some scholarships, recruiting material and more classroom equipment.

Officials cut the ribbon on that dream Thursday, the 19,750 square-foot, $7.5 million Kreher Agriculture Center that provides cutting-edge technology to students, like combine and welding simulators and state-of-the-art classrooms and laboratories and features an animal science pavilion.

See also: Agriculture Center will be ‘showpiece’ for LLCC campus

“This is not what I remember a college building to look like,” joked Wienoff, a Springfield certified public accountant. “This is truly high tech.”

Decorative elements in the building include reclaimed wood from a Sangamon County barn on several walls and “logs” used as informal tables, footstools or seats.

The project was funded by annual distributions from the Kreher Farm Perpetual Charitable Trust to the Lincoln Land Foundation. The trust has $18 million in assets.

The college’s 150 or so agriculture students also will be able to take advantage of CAD-based landscape design and drone technology. Horticulture classes can build and grow indoor landscape beds no matter the weather.

Classes and other activities will move into the building this fall.

Bill Harmon, Lincoln Land’s longtime agronomy professor and Ag Club adviser, Thursday recalled those “dream bigger” recommendations at the outset and said he would put the facility up against any in the state.

“It’s almost hard to believe,” Harmon admitted. “This building, there’s nothing else like it at any community college and very few universities in Illinois. (It’s) designed around the student experience, whether it’s the gathering areas they have or the technology that’s available to them, to make them the best prepared for their job or for future education.

One of the showplaces in the front of the building is the large glassed-in lab with combine, sprayer and drone simulators. A hands-on, 3-D sand table features an elevation color map, topographic contour lines and simulated water.

The lab was envisioned for students to develop skills in operating equipment before using actual machinery.

The multi-use animal science pavilion can house live animals, like the Southdown ewe lambs that were penned up Thursday.

Agriculture professor Craig Beckmier will be breeding the sheep, explained Brooklyn Wurm, a freshman agriculture major from Decatur, Indiana. In September, the ewes will be brought back and an ultrasound lab will be set up for the animal science class.

Lincoln Land president Charlotte Warren said the building will be a recruiting centerpiece for students who want to go into an array of agricultural professions.

“Agriculture is so much more these days than just digging a hole and planting something,” Warren said. “Hopefully, with all of the technology, all of the opportunities, between using drones and GIS and research and seeds and fertilizer, as well as planting in the ground, we can get city kids as well as our more traditional farming people involved in the curriculum. This is an important, important economy of Illinois and we want to play a big role in that.

“We see Lincoln Land as a central hub for agriculture education and the agriculture industry.”

Students can study agronomy, animal science, agriculture business and horticulture in one year, with a certificate, or two years with an applied science degree.

The active learning classrooms, Harmon said, are designed so instructors are not so much talking to students, but “working with them, helping them, because it’s all about learning. We want them to be problem solvers. This building is really dedicated to student success and seeing what’s possible.”

The college will be revamping its agriculture curriculum to reflect the more project-based learning on the campus and at the Kreher Research Farm, with locations in Blue Mound and Mount Auburn.

Alexis Carroll, a sophomore from Carrollton where her family farms, said she was gobsmacked by the facility.

“I’ve never seen anything like it, not even at the university level,” said Carroll, the Ag Club president who will be studying at Southern Illinois University in Carbondale in the fall.

“This building is going to feel like home (for students). Students will have close connections to teachers and with other students and all of these other resources and benefits at their fingertips. That’s really amazing.”

Charles and Irene Kreher, Wienhoff said, farmed and raised cattle on about 300 acres around Blue Mound. The Krehers were “a low-key, typical agriculture couple,” Wienhoff added.

Once, when the couple was in Springfield discussing business, Wienhoff remembered, Charles Kreher, dressed in bib overalls, wanted to roll the meeting along because some of his cows were calving.

“The word frugal fits them to a tee,” Harmon said of the Krehers. “They were from the Greatest Generation. I think they would be happy when they see the opportunities this is going to give to our students. Would they think it’s too much? No, because as (Wienhoff) said, we want this to wow potential students. We want them to look at this place and say, ‘Why would I go anywhere else?’

“When we say that you belong at Lincoln Land to a potential student, we mean it. It does wow them.”

Sun May 9 , 2021
IS183 Art School of the Berkshires was awarded a $4,100 matching grant for exterior work to their home base, Citizens’ Hall in Stockbridge, shown above. Photo courtesy IS183 State Historic Preservation Grants awarded to three Berkshire County entities BERKSHIRE COUNTY — Preservation Massachusetts, in partnership with The 1772 Foundation, recently […] 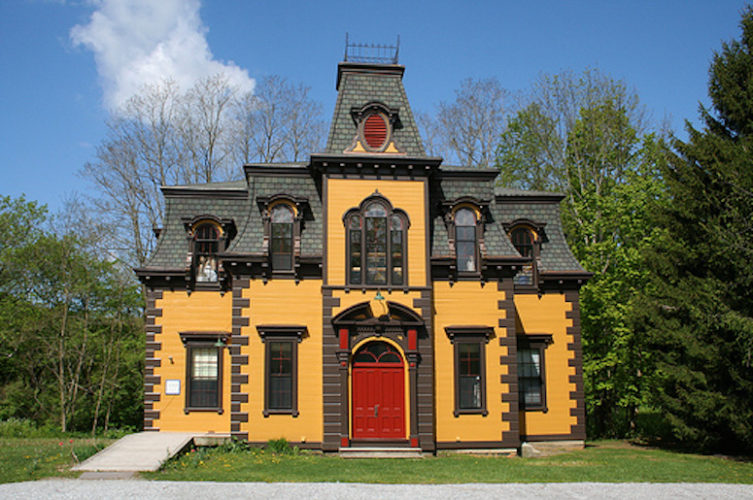