If you dream of owning a historic small-town inn (and have a few dollars in your pocket), there’s a Ligonier property waiting for you. Thistledown at Seger House, just two blocks from the Diamond, is on the market for $1.795 million. There are eight bedrooms and eight bathrooms in the […]

If you dream of owning a historic small-town inn (and have a few dollars in your pocket), there’s a Ligonier property waiting for you.

Thistledown at Seger House, just two blocks from the Diamond, is on the market for $1.795 million.

There are eight bedrooms and eight bathrooms in the Victorian edifice, clad in red Lake Superior sandstone, with another guest suite in the adjacent carriage house. One of the suites in the main building is handicapped accessible.

The boutique hotel was built in 1915 as a home for coal and timber baron John Seger and his family.

It has original woodwork and three sets of what are thought to be Tiffany stained-glass windows. There are six working fireplaces, each with original, unique tile work from American Encaustic Tiling Co. in Ohio, and a roof of green Ludowici terra cotta tile.

Thistledown at Seger House, a boutique hotel in Ligonier, is listed for sale at $1.795 million.

The building has an original dumbwaiter, kitchen facilities, an elevator and modern heating and cooling systems. The first floor contains a large lounge and area suitable for a restaurant or other retail business.

It’s been quietly listed for sale since last summer with Pennsylvania Commercial Real Estate Inc. Owners Adam and Michelle Gardner of Latrobe say they aren’t in a great hurry to sell but will be ready to move on when a buyer comes along.

Adam and Michelle Gardner, owners of Thistledown at Seger House in Ligonier.

“This has been a wonderful adventure, but now seems like the right time to pass it on,” Michelle Gardner said. “We’re busy with other things.”

The couple moved to Latrobe from Ligonier in 2019 to be closer to their two children, one in college and one a rising junior at Kiski Prep. They also own BattleZone Latrobe and GOG Paintball in Loyalhanna.

The Gardners bought the Thistledown property in early 2013 from Excela Health, which had used it as a surgical center.

The Seger family sold it to the Allegheny County Sisters Of Charity in the mid-1940s for use as a hospital. About two years later, it was bought by Helen Newlin McGinnis and renamed McGinnis Hospital.

It was purchased in the 1980s by Westmoreland Hospital, which later merged into the Excela Health system, and operated as a surgical center until 2011.

“Even when it was still a surgery, I’d drive by and look at it and wonder what it was like when it was a home, and think how beautiful it was,” Michelle said. “I’d say, if it ever goes for sale, we’re buying it.”

Thistledown at Seger House has three sets of stained glass panels, thought to be Tiffany.

When it did go on the market, she thought of it as a place to move her business, Bo Peep Yarn Shop, from its spot on the Diamond.

“We weren’t thinking of making it an inn. I didn’t know what we’d do with rest of the space,” she said.

The couple toured the property, which was listed at about $600,000, Adam Gardner said.

“(Excela) finally got to the point of saying, just please make an offer,” he said.

“So we bought it and said, now what?” Michelle said.

The idea for the boutique hotel took shape as the couple started removing the medical center features from the building.

“We did a lot of the demolition and then realized we had a major project here,” Adam said.

Some features, like the tilework, fireplaces, front windows, woodwork in the foyer and the stained-glass windows, were in relatively good shape. But the roof leaked, and the plumbing and electrical systems needed an overhaul.

The Gardners entrusted much of the work to Bloxdorf Contracting of Mahaffey, Clearfield County.

“They were able to give the building a very tasteful update, while maintaining the historical integrity,” Michelle said.

Renovations took about nine months, finishing in September 2013. The Gardners actually welcomed their first guests in August, a woman from Alabama in town for a rug-hooking workshop and her husband.

“We had one room ready, and they were our guinea pigs,” Michelle said.

A light-filled guest room at Thistledown at Seger House in Ligonier.

The inn normally is busy from May through October and again around the holidays, the Gardners said. Business was slow during the pandemic, but summer bookings are picking up.

While Michelle no longer operates the yarn shop, Bee Kind Winery still has a retail outlet at Thistledown. The first-floor restaurant space formerly occupied by Myriam’s Table is available for lease.

In addition to being listed with the realty company, Thistledown is featured on the opinion-based real estate blog captivatinghomes.com and soon will be featured on circaoldhouses.com, a curated historic house marketplace.

“It’s perfect for someone who loves Hallmark movies,” Michelle added.

Shirley McMarlin is a Tribune-Review staff writer. You can contact Shirley at 724-836-5750, [email protected] or via Twitter .

Like a Modern Treehouse, This Cedar-Clad Los Angeles Home Is Drenched in Natural Light 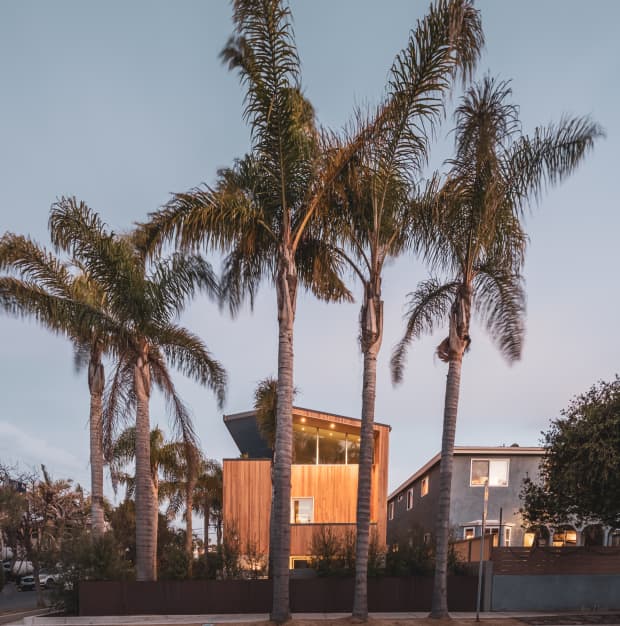