An affordable housing nonprofit plans a 12-home development in West Boise. Leap Housing Solutions, which operates in the Treasure Valley, conceived the Whitney Commons development on Shamrock Avenue. Its residents will purchase homes without buying the land underneath them in an arrangement similar to a community land trust that is […]

Leap Housing Solutions, which operates in the Treasure Valley, conceived the Whitney Commons development on Shamrock Avenue. Its residents will purchase homes without buying the land underneath them in an arrangement similar to a community land trust that is designed to keep the property affordable in perpetuity.

The land at 921 North Shamrock Ave. is near West Fairview Avenue and North Cloverdale Road in West Boise. The parcel is owned by Dark Horse Associates, a developer, which plans to sell the land to Leap this month for an undisclosed amount, according to its owner, Wendy Klahr. Bart Cochran, executive director of Leap, said he plans to apply for building permits in 2022.

While the houses will be sold, the land underneath will remain in the hands of the Leap Housing Trust, administered by Leap’s board. Unlike a community land trust, the new homeowners will not sit on the board that governs the land. Cochran said that once Leap owns the property, it will apply for property tax exemptions from Ada County.

Leap said it would not disclose the purchase price of the land until after the sale is complete.

On April 30, Leap announced that the nonprofit has raised $2.1 million in funds for the housing trust, including a $300,000 grant from the Blue Cross of Idaho Foundation for Health. Saint Alphonsus Health System offered the first donation with a gift of $240,000.

“We’re lowering the cost of housing by taking the land out of the equation,” said Cochran in a phone interview. Buyers for the homes will be required to have combined household incomes of no more than 80% of the median income in Boise, which is currently $59,850 for a family of four.

Median household income designations are used by local governments and the Department of Housing and Urban Development, a federal Cabinet department that aims to address the nation’s housing needs, to ensure that affordably-designated developments go to those who can’t afford more expensive housing.

In Boise, rent has been rocketing for years as the rate of newcomers flocking to the mid-size city eclipses the pace at which new housing is built. While many large American cities have seen rent fall during the pandemic, rent in Boise has increased nearly 12% since March 2020, according the Apartment List. The same goes for home prices: The cost of a home in Ada County is up nearly 26% over a year ago, to a median price of $452,400 in February.

Leap’s planned development, by contrast, will have homes priced at about $275,000. A buyer’s monthly payments would include a mortgage payment, interest, property taxes, homeowner’s insurance, a land lease fee and a common area maintenance fee. On a 30-year mortgage, Leap estimates that, after a down payment of $9,625, an owner would pay about $1,571 per month.

In the U.S., residents are generally considered cost-burdened if they pay more than 30% of their income for housing. For Leap’s homeowners on Shamrock Avenue, they would be right on the border of affordability.

Leap expects each new house will cost about $325,000 to build, including the price of land and of construction. With grant funding it has received, the organization will be able to sell the homes for less than that, according to Cochran.

“Land is increasingly expensive, because there’s so much demand for it,” Cochran said. “There’s nothing static about this business right now: supply chains seem to not be working properly, the raw ingredients of housing are rising, so there are a lot of things that are moving, but that’s where we are right now.”

Eleven of the houses will have about 1,000 square feet with three or four bedrooms and off-street parking. An existing 3-bedroom home on the property is being rehabilitated to be rented out to households that earn up to 80% of the area’s median income.

Shamrock Avenue has a bike path that will run through the development, and Cochran said he plans to grow native, drought-tolerant plants on the landscape to reduce water usage.

LEAP plans to use indieDwell, a Boise modular home builder with a factory in Caldwell, to construct the houses.

Although the existing building on Shamrock Avenue will be for rent, Cochran said that selling the other 11 homes in the Whitney Commons development will aim to provide an important advantage to low-income families.

“The reason that we emphasize home-ownership is that it’s asset-building,” Cochran said. By owning their homes, Cochran added, each family will profit from tax benefits while their house appreciates in value.

“When they go to sell it, they’ll have something to carry forward into the future purchase of a home,” Cochran said.

Because Leap will maintain ownership of the land, the trust will govern the amount the homes are re-sold for. Rather than being resold at market rates, Leap will dictate the homes’ sale price based on a formula that accounts for the home’s appreciation, costs of the mortgage pay-off for the homeowner at closing, plus a calculation of a fair return on investment, according to a draft ground lease for Leap Housing Trust properties shared with the Statesman. The formula includes the homeowner’s equity on the home, inflation rates and the value of improvements made to the home.

In the Treasure Valley, where home values are rising much faster than wages, tethering the homes’ resale cost is an attempt to ensure the homes will remain affordable.

Since 2012, an affordability crisis has been surging as the median income in Idaho has risen by just over 27%, while the median home price has risen nearly 146%, according to QuoteWizard, an insurance marketplace.

“(There will be) some appreciation in the market, but it’s to an extent that it’s still affordable to a low-income family in the future,” Cochran said. “There isn’t really any other affordable housing product like this.”

To construct the estimated $3.5 million development, LEAP has received funding from a variety of sources, including a grant of around $500,000 from the Department of Housing and Urban Development awarded by the Idaho Housing and Finance Association and a Community Development Block Grant of around $300,000 awarded by the city of Boise for the renovation of the existing structure.

As part of its $2.1 million campaign, the group received an undisclosed amount from a Fresno, California, -based and now dissolved organization called the Whitney Foundation, from which the development’s name is derived.

In an emailed statement to the Statesman, the foundation’s former executive director, Ellen Bush, wrote that the gift will “contribute to a land trust to ensure ongoing affordable home ownership.”

Whitney Commons is the second project Dark Horse Developments has pursued with Leap. The first, Caritas Commons, is now being constructed by IndieDwell in Northwest Boise. The project will produce 14 new three- and four-bedroom homes for sale under the trust model, with a completion date of the end of 2021. Klahr, the owner of Dark Horse, purchased the initial parcel and filed for initial approvals from the Planning and Zoning Commission and the City Council, after which Leap bought the land to build the subdivision.

“If I develop a little project and sell it to a builder … if that builder changes his mind after the sale, there’s little that can be done,” said Klahr. “When I work with Bart, there’s actually some certainty that my vision for affordability is actually going to come to fruition.”

In 2019, Leap offered four units for rent in Northwest Boise across the street from the coming Caritas development, and four more were added in 2020. Another Leap project will build two homes on excess land adjacent to the Collister United Methodist Church in Northwest Boise, and another rental project has been constructed in Nampa.

The National Low Income Housing Coalition estimates that there is a deficit of over 22,000 affordably priced units in Idaho.

“We’re a tiny drop in that bucket,” Cochran said. “I wish instead of 11 units it was 1,100 units, but we’re making a dent, and it’s important for these families, and we’ll continue to work towards making a dent.”

Ian Max Stevenson is a breaking news reporter at the Idaho Statesman.

Airstrikes and Protests Escalate as U.S. Steps Up Mediation

Tue May 18 , 2021
Here’s what you need to know: Video transcript Back transcript Israel Strikes Gaza Tower Housing A.P. and Other News Outlets An Israeli airstrike destroyed a prominent building in Gaza City on Saturday that housed media outlets, including The Associated Press and Al Jazeera. The Israel Defense Forces said it gave […] 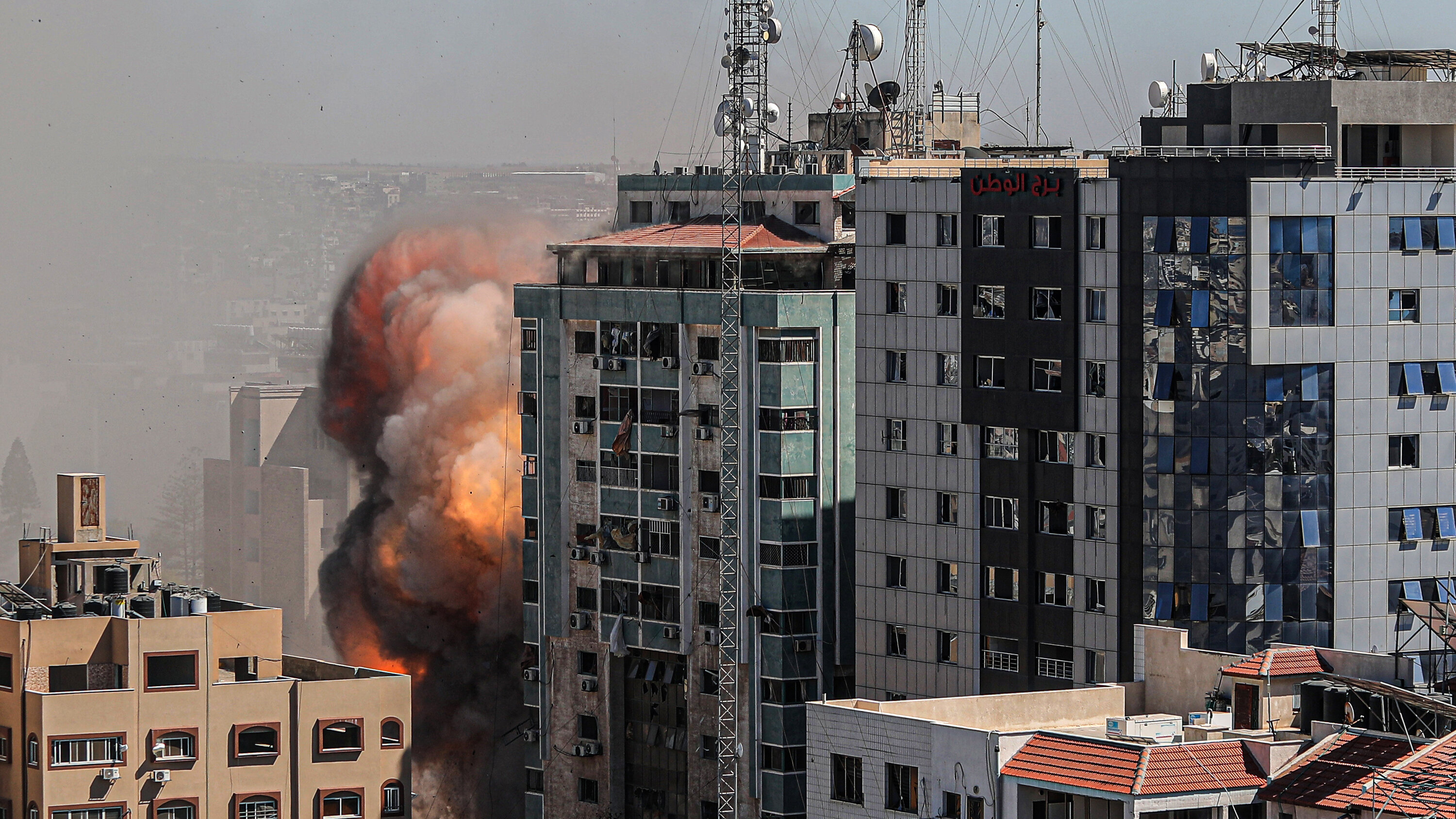