In northeast Minneapolis’ arts district, a tall, lanky man with slate-colored, shoulder-length hair often wanders by the railroad tracks with his phone at arm’s length, recording himself. By posting selfie videos expounding on “How Relationships Are Like a Night at the Casino,” “Why Quitting Is Awesome” and “Why It’s Weird […]

In northeast Minneapolis’ arts district, a tall, lanky man with slate-colored, shoulder-length hair often wanders by the railroad tracks with his phone at arm’s length, recording himself.

By posting selfie videos expounding on “How Relationships Are Like a Night at the Casino,” “Why Quitting Is Awesome” and “Why It’s Weird to Make Kids Read the Bible,” among other subjects, Abraham Piper has become one of Minnesota’s most popular TikTokers, with nearly a million followers. His high-energy, hyper-expressive persona resembles Wayne from “Wayne’s World,” waxing philosophical about linguistics and the meaning of life.

It’s heady stuff for a platform dominated by teen girl dance-and-lip-sync routines that wouldn’t have made it past a bedroom mirror before the internet.

“I’m an old dude compared to most people on TikTok,” Piper said, explaining his popularity with a young audience. “And I have experienced what they’re going through now already and I’m talking about it in a way that maybe their parents aren’t.”

A decade ago, when he was a newly married young parent, working an unglamorous warehouse gig, Piper started a personal blog called 22 Words. Within a few years, he transformed it into a trending news site drawing millions with its mix of shock factor and schadenfreude, funny and feel-good.

One month in 2013, 22 Words improbably became the second-most-shared site on Facebook, beating behemoths such as CNN and the Huffington Post. Back then, it was run solely by Piper, the low-key David of viral clickbait to Goliaths like Upworthy and BuzzFeed.

Today, with the help of his Los Angeles-based “tech geek friend” and business partner Josh Sowin, Piper has turned 22 Words into a company the two say earns $30 million in annual revenue.

Yet Piper speaks nonchalantly about his ability to draw attention online: “I’m just sort of a conduit for various interesting things,” he said.

Though it may seem surreal to earn a living off celebrity gossip and cat videos (“It’s amazing you can get paid for nonsense,” as Sowin’s father recently put it), there’s an art and a science to getting people to click. And Piper has proved to have a knack for it.

Piper, who grew up in Minneapolis’ Phillips neighborhood, began cultivating his wide-ranging interests through high school postsecondary courses, where he started a philosophy major at the University of Minnesota.

For the next 11 years, he studied at five different schools, including Red Wing Tech, where he learned how to build and repair guitars.

It was a period of “flitting around,” Piper said, where he followed his whims to a certain degree. “I decided to switch from a liberal arts degree to guitar making in, like, the time it took for me to walk up a flight of stairs in my dorm room,” he said.

By the time he received his bachelor’s in English, through the weekend program at Augsburg, he was a parent, working full time. In 2008, he started writing 22 Words, based on the constraint that every post had to be exactly 22 words long. “I’m a big fan of brevity and simplicity,” he explained. “I’m a big fan of shooting my mouth off. And I’m a big fan of gimmicks.”

Twitter wasn’t popular yet (Piper hadn’t even heard of it), but he used his site in a similar way. He shared personal musings on what he was reading, or things his kids were doing, such as a video of his twin babies wrestling.

In 2010, he expanded his repertoire to include whatever fun things he found on the internet. Soon, the site drew a few thousand page views a day, and using ads that linked to products on Amazon, he earned a few hundred dollars a month.

In early 2011, 22 Words had its first million-page-view month and Piper had become a sort of human Rolodex of the internet. He’d get up at 4:30 a.m. and start checking the 500-some blogs in his RSS feed, scanning headlines for items to aggregate. He sought stories that were “the best of the internet — or at least things that I thought were funny,” he explained.

Piper estimates he wrote more than 10,000 posts over the course of several years before handing off daily operations of 22 Words (plus several other affiliate entertainment sites) to a team of 30-some employees “saving the world from boredom,” as the site’s tagline explains.

A typical perusal of 22 Words might bring news of a burglar who fell asleep while robbing a house, a claim by one of Donald Trump’s ex-bodyguards that the former president owes him $130 for McDonald’s food, pregnant identical twins married to identical twin brothers, and a woman who makes $4,000 a month selling videos of herself farting.

Although only a few of the hundreds of stories posted each month are bona fide hits, those hits can be astronomical. One that Piper points to as an example is a post showing bread with 16 different degrees of toastedness that compelled 300,000 people to comment on which one they preferred.

Since attracting eyeballs on the internet can be fickle, subject to the whims of changing tastes and algorithms, Piper and Sowin wanted to expand into selling physical products. In 2020, fortuitously timed to our global quarantine, they launched a puzzle company called Blue Kazoo.

The company specializes in high-design images of everything from outer space to vintage travel posters. The most challenging is a series of three solid-colored puzzles called “Black and White and Red All Over,” which Piper suggested to Sowin as a joke. The next thing Piper knew, Sowin had the puzzles designed and ordered and customers were soon spending as many as 36 hours to complete one.

In the past few years, Piper has also been focused on another screen-free pursuit: painting out of a studio in Minneapolis’ Solar Arts Building.

On his personal website (abrahampiper.com), Piper self-deprecatingly pitches his contemporary abstract works as ” art for you to put in storage,” ideal for the back of any closet, crawl space, or basement. Though many works look gallery-ready, they’re not exactly easy to purchase, considering that Piper’s site doesn’t include his contact information.

This is partly due to Piper’s introverted nature. But also, since it’s not how he makes a living, he’s not concerned about the logistics of selling it. “I won’t ship anything, because putting a painting into packaging and going to FedEx feels like doing my taxes,” he explained.

Piper takes a similarly carefree approach to fashion, being the rare man who can pull off a pair of red, floral-print clogs and is the owner of a colorful collection of stocking caps. “Most popular, easy-to-find men’s clothes are so safe and that’s boring,” he explained. “The older I get, the more I want to have some fun, and be a little more interesting.

Piper follows his muse on TikTok, too, though he joined the platform last November out of a sense of professional obligation, being the owner of a media company. He was goaded by his oldest son’s doubt that Dad could rack up 100,000 followers by the end of the year.

Piper’s kids — a 16-year-old, 12-year-old and 10-year-old twins — maintain what is perhaps a healthy separation between their dad and his online persona. Or at least they don’t seem to be embarrassed. “My oldest, I would say, is disaffected but amused,” Piper said. “He’s on TikTok, but he doesn’t ever mention my videos.”

Piper’s videos often focus on water-cooler trivia (debunking the myth that women speak more than men; explaining “Norman Doors,” which appear to operate in the opposite way they do). Or random advice (his hangover cure; how he keeps his kids from swearing).

His TikToks that have received the most attention — including coverage in the New York Times — share his critical perspective on the devoutly evangelical worldview with which he was raised. (His father is John Piper, former pastor of Bethlehem Baptist Church in Minneapolis and author of dozens of books on theology.)

Adam Schrag, a Carlson School of Management lecturer who studies the so-called “attention economy,” attributes Piper’s popularity on TikTok to his authenticity and ability to tell stories using digital media.

“He has a narrative sensibility that maps well onto the algorithmic side of these machines,” Schrag said. “He seems very savvy at creating that parasocial relationship with his audience.”

Schrag said that despite the differences between Piper’s TikTok material (“playful, engaging, direct and philosophical”) and that of 22 Words (“tabloid shallowness”), knowing how to reward viewers underlies the success of both. “It’s interesting how he’s harnessed these two different forms of content, but the back-end architecture is still that same Skinner box,” Schrag said, referring to the way we click what’s interesting, like rats pressing buttons for food.

Unlike other online celebrities, who leverage their popularity in, say, sports or entertainment, onto social media, moving their audience from one medium to another, Sowin notes that Piper’s TikTok following was created from scratch, independent of his viral news audience, suggesting there’s more than just luck behind his success.

By analyzing the feedback loop on thousands of posts — determining why each did or didn’t do well — Piper has absorbed the psychology of what captures people’s attention in a way that’s almost instinctual, Sowin said. “Even though it seems very natural, he’s trained himself for 20 years on these things.”

With TikTok, Piper has come back to the roots of his original blog, perhaps, by taking a more personal approach and talking about whatever piques his curiosity. Unlike 22 Words, he avoids being strategic or posting just for the sake of getting clicks.

Fri May 7 , 2021
Colin Lenton Steve Alloy, president and CEO at Stanley Martin Homes. Timing is everything. In February 2020, two top 100 U.S. home building companies—Reston, Virginia–based Stanley Martin Homes and Columbia, South Carolina–based Essex Homes—were pushing hard to close the deal that brought Essex’s operations and all of its employees under […] 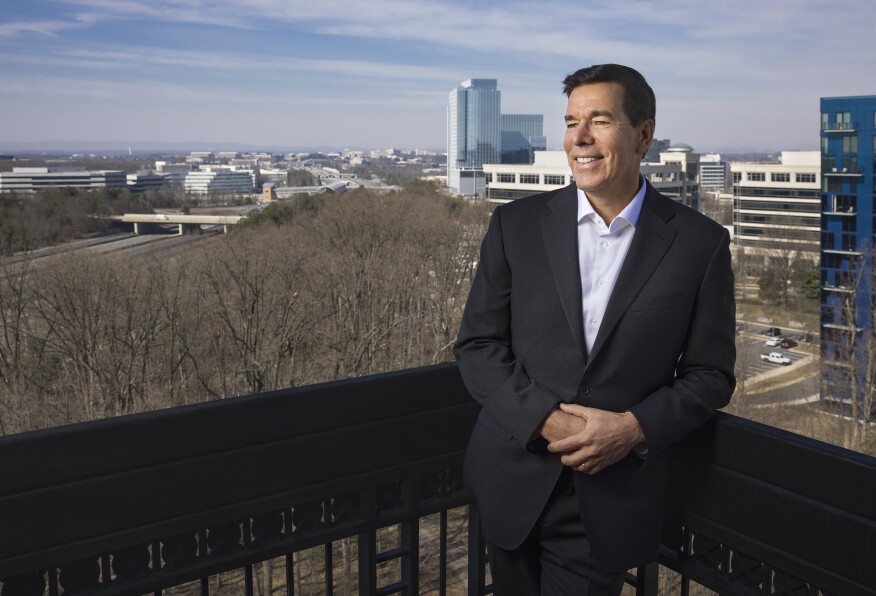