Posted on June 1, 2021 By Editor Riverside, Avondale, Ortega, Murray Hill, San Jose, San Marco, St. Nicholas, Top Stories 1326 Avondale Ave, $680,000 Is it a bubble, or is it because of supply and demand? Is it because of COVID, like almost everything different or challenging about the past […] 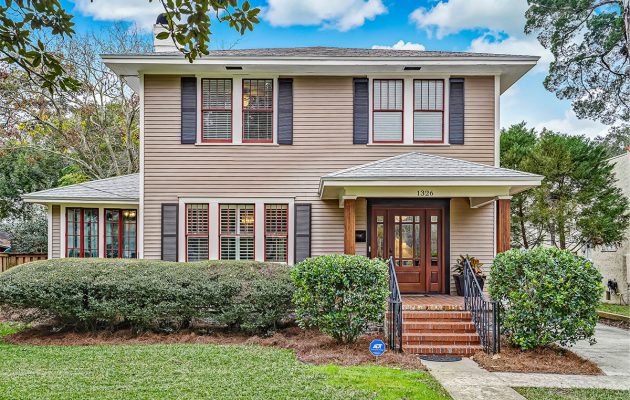 Is it a bubble, or is it because of supply and demand? Is it because of COVID, like almost everything different or challenging about the past year and a half has been, or is it just cyclical? Realtors and economists have their theories, but one thing is sure – Jacksonville is experiencing the craziest housing market since 2008.

What does that mean for people who either live in or want to move into our historic neighborhoods? According to some local realtors, both historic and new home communities are selling well right now.

“We are experiencing a ‘super sellers’ market’ in both the historic neighborhoods and new home communities,” said Josh Cohen, managing broker for Berkshire Hathaway HomeServices Florida Network Realty. “In the Riverside, Avondale and Ortega markets, 26 percent of the properties sold over asking price in March, and we expect a similar trend in April.” The cost of lumber and other materials and a backlogged supply chain continue to limit new home construction and have increased costs substantially, he noted.

The Jacksonville market seems to have fared slightly better during COVID than many of its national counterparts in terms of real estate, according to FortuneBuilders, a real estate education company founded by nationally recognized real estate investors. It reports that, while the pandemic has served as an obstacle, Jacksonville looks positioned to return to pre-pandemic levels sooner rather than later, which bodes well for everyone participating in the market: buyers, sellers and investors.

The company’s overview of Jacksonville lists median home value at $218,194 with a one-year appreciation rate of +11.2 percent and a median rent price of $1,345. The foreclosure rate is 1 in every 3,935, or 2.5 percent. The historic neighborhoods of Ortega, Ortega Forest and Ortega Terrace; St. Johns Avenue; Avondale; and Hendricks Avenue, San Jose Boulevard and San Jose Forest are listed as some of the most expensive in Jacksonville, according to NeighborhoodScout.

Historic homes are less available currently than new homes, according to Sally Suslak, managing broker with Traditions Realty LLC. “As a result, historic homes in our neighborhoods of Riverside and Avondale are selling for more per square foot than most new homes.”

A May 7 article in FloridaRealtors reported that the U.S. housing market is on a hot streak with double-digit annual gains in home prices, bidding wars and surging buyer demand. The median selling price for a home is up $35,000 compared to a year ago, which is the fastest-paced increase since 2006, as reported by Lawrence Yun, chief economist of the National Association of Realtors, in the article.

“New development home prices have risen about $46,000 this year because the cost of the raw materials needed to complete a home has skyrocketed, especially the price of lumber,” Suslak said regarding the Jacksonville housing market.

The rising prices are coinciding with an increased interest in buying.

“We are seeing everyone enter into the market,” Cohen said. “Many buyers are sellers who are taking advantage of the market, tapping into equity and moving up. There is still a surge of buyers moving from other parts of the country deeply impacted by the pandemic.”

According to Jeff Rohde of Roofstock, a national real estate investment marketplace that focuses on investment real estate, more people are moving to Jacksonville for a more suburban lifestyle in a smaller affordable market instead of crowded urban living in an expensive big city. Average single-family home values in Jacksonville were up by more than 5.5 percent in September 2020 from last year’s record high, while for-sale inventory is down by nearly 42 percent compared to the previous year, as reported in Roofstock’s March article.

The combination of rising prices, increased interest and lack of supply is a challenge, especially for first-time home buyers.

“They are competing with cash buyers and investors for the same home, depending on price point,” said Suslak. “In this market the really good deals are few and far between.”

“The inventory we have moves in light speed,” Cohen said. “Multiple offers are common. Buyers will waive appraisal contingencies, and even lenders will do so on certain loans. Buyers may also offer to pay sellers deed stamps and title insurance.”

“If a property is priced competitively, it will sell in a matter of days,” Suslak said.

It is not uncommon for buyers to offer more than asking price to get the home they want. “However, if financing is involved, the property must appraise for the higher price, and sometimes it doesn’t.”

Buyers and seller need to approach home buying cautiously in this volatile environment. Both Cohen and Suslak agree that sellers need to be prepared to secure a new destination in less than 30 days.

“Sellers may list their home and sell it in a weekend,” Suslak said. “In that case they need to find a new place to live in a very tight market.”

“For buyers, the biggest challenge is finding a property they really love,” she said. “If they are not cash buyers, then they have to have their financing arranged in advance and then make an offer very quickly.”

In a seller’s market, some renovations may not be as necessary as in a buyer’s market, an important factor especially for those trying to sell an older home; however, local realtors agree that today’s buyers are looking for move-in ready homes. Given the low interest rates, they are able to afford more expensive homes and aren’t generally interested in taking on major renovations. A house can still have an older kitchen and bathrooms and be considered move in ready, however.

“Kitchen appliances and solid surface countertops are popular renovations that can update a kitchen without replacing all the cabinetry,” Suslak said.

Suslak and Cohen again agreed that a new roof, new electrical and plumbing are on the list of the most important to which sellers should pay attention.

“You could run into problems with insurability and financing if these key components have significant wear and tear,” said Cohen.

“A seller doesn’t necessarily have to do a lot of renovating in today’s market but does need to be upfront about what may need to be done,” said Missy Cady-Kampmeyer, who is owner and broker of Cady Realty. “However, buyers need to understand that the historic neighborhoods are not cookie-cutter areas. The homes come with quirks, but the pros of having a well-built home right next door to the river and in walking distance to shopping and restaurants outweighs the cons.”

“People buy lifestyle, especially right now after COVID,” she said. “Avondale, Riverside and Five Points are ‘Walk Score’ areas where you never have to use a vehicle. They have diverse culture, history, unique homes, the river, parks and running trails, and yet are very urban which draws everyone to these neighborhoods and drives prices up.”

All this volatility has some buyers concerned that Jacksonville is in a bubble similar to the one in 2006 and may pop with prices dropping drastically. According to Morgan Stanley as reported in the Florida Realtors article, however, this isn’t 2006. Housing inventories are low, credit remains tight and lenders aren’t issuing risky loans like they did back then.

“The housing market is based on price point, location and type of property,” said Jeff Chefan, broker for First Coast Sotheby’s International Realty’s San Jose office. He noted that inventory is down in most price points with the exception of very high-end houses.

“2006 was the benchmark for high market value in Jacksonville,” Chefan said. “Along the river, we’re down 20-40 percent compared to 2006, while Ponte Vedra prices have increased 30-40 percent.”

According to Chefan, that difference is due mainly to who is attracted to each of those areas.

“The riverfront neighborhoods are primary resident markets generally,” he said. “In Ponte Vedra, many of the buyers are coming from elsewhere now that they can work remotely who want a second home at the beach. They’re willing to pay more because they come from high-priced markets and, at the same time, they find homes in Ponte Vedra are a better value than those in South Florida.”

So, is it time to sell or buy?

“Timing is a key economic driver when it comes to moves in real estate,” Cohen said. “It’s a great market for sellers. Buyers who qualify should purchase. Interest rates are still near historic lows.”

Thu Jun 3 , 2021
MaineWorks links people who face barriers to employment with construction companies that need … [+] workers Photo credit: Joanne Arnold Margo Walsh knows the power of connections. She saw it for years in her work as a recruiter for a New York investment firm, a competitive field that had her […]