If you are like me, you are feeling overwhelmed by the sheer size, scope, and number of federal spending proposals that have been coming out of the Biden White House: The American Rescue Plan. The American Jobs Plan. The American Family Plan. The budget. It is too much to process, and the price tag – trillions of dollars – too gargantuan to conceptualize.

Unfortunately, because the stakes are so high, we cannot let these proposals go unscrutinized, even if we think all we can do is hunker down and hope we survive the tidal wave threatening to crash over us. Given their astonishing cost and expanse, if these proposals are enacted and do not work we will suffer.

Yesterday, I testified before the House Committee on Education and Labor and was able to zero in on what, at least in education, are the big thrusts in all this. You can read my written testimony for my thoughts on education spending broadly. What follows here is a relatively quick offering of research and data on what appear to be the major targets for funding: early childhood education and childcare, building and renovating K-12 schools, and “free” community college.

This is not a comprehensive analysis or rebuttal of any proposal, but a quick collection of evidence to get you started on responding when someone tells you, “Of course Washington needs to spend more on these things.”

I know this is no longer even an orange traffic cone in the way of the federal Mack Truck, but the Constitution does not allow broad federal spending for child care, schools, etc. And the rule of law should still matter.

This 2010 blog post remains the most succinct thing I’ve written explaining that nothing in the Constitution – not the “general Welfare” clause, not the taxing power, not the “necessary and proper” clause – allows the feds to go beyond the specific enumerated powers given to them, among which you will find nothing about education. I also recently completed reading these volumes, and there is almost zero mention of education except for a bit of discussion of a national university. And how was National U dealt with? As James Madison recorded Gouverneur Morris of Pennsylvania explaining, placing the creation of a national university among the enumerated powers “is not necessary. The exclusive power at the Seat of Government, will reach the object.”

I heard much yesterday suggesting the evidence is overwhelming that money spent on early childhood education and care is a terrific investment. What gets in the way is the early childhood research, especially the top‐​quality, random‐​assignment kind that controls well for unobservable characteristics like motivation, and allows for long‐​term tracking. What we often see is that whatever benefits there are soon fade out, and a lot of research cited as proof that early childhood funding pays off falls short of proving anything.

This 2014 Policy Analysis from Professor David Armor is a great overview and analysis of the research, both the methodologies and what the body of research shows.

I also came across this paper from the Institute for Family Studies, which discusses a lot of the child welfare research on early childhood. Not only is government child‐​care assistance not always positive, it can sometimes hurt.

It is asserted that public school buildings are often in terrible condition and only the feds can spend enough to resurrect them.

There is some grounds for this conclusion, including a recent Government Accountability Office (GAO) report showing that about 41 percent of districts say at least half of their schools need updates or replacements of HVAC systems, about 28 percent improvements of their interior light fixtures, and more.

Matters, however, are not as simple as “districts say they’ve got problems, the feds have to fix them.”

For one thing, a federal report on school conditions based on a 2012–13 survey found that only 3 percent of permanent buildings were in “poor” condition, meaning they fell short of “minimum requirements for normal school performance,” and even in poor districts only 4 percent of permanent buildings were in such health. Despite the 4 percent finding, the crumbling building problem is thought to be especially acute in low‐​income districts, and perhaps it is. But if so, it is not clear that it is for want of resources. As a 2019 federal report shows (table 7), in the large majority of states the lowest‐​income quartile of districts spend the most per student. When aggregated at the national level they spend almost as much as the wealthiest districts, and if you include the second lowest quartile, the spending in the bottom half of wealth is more than $1,000 per student higher than in the top half.

Another problem, which the GAO report and others find, is that many districts do not want to pay for building construction or improvements, and when the public does want something it is not mundane stuff like maintaining a boiler, but building new, much bigger buildings, or buying the latest tech. As the GAO reported of a Rhode Island district, “Officials said participants in public forums told them they preferred educational enhancements over facility repairs.” Of course, money could also just get burned off in bureaucracy.

It is not clear that school districts have major facilities problems, and if they do, that a lack of funding creates them.

Nothing is free. Someone has to pay. And if we have learned anything in higher education it is that when students pay with someone else’s money, especially taxpayer dollars, it is a recipe for massive, expensive distortions.

The chart below strongly suggests that, ironically, what created skyrocketing college sticker prices – arguably the biggest problem in higher ed – were federal laws creating and expanding student aid to make college more affordable. It turns out the more you give people someone else’s money to pay for something, the more they demand that thing, the less they focus on getting it as efficiently as possible, and the higher prices go. 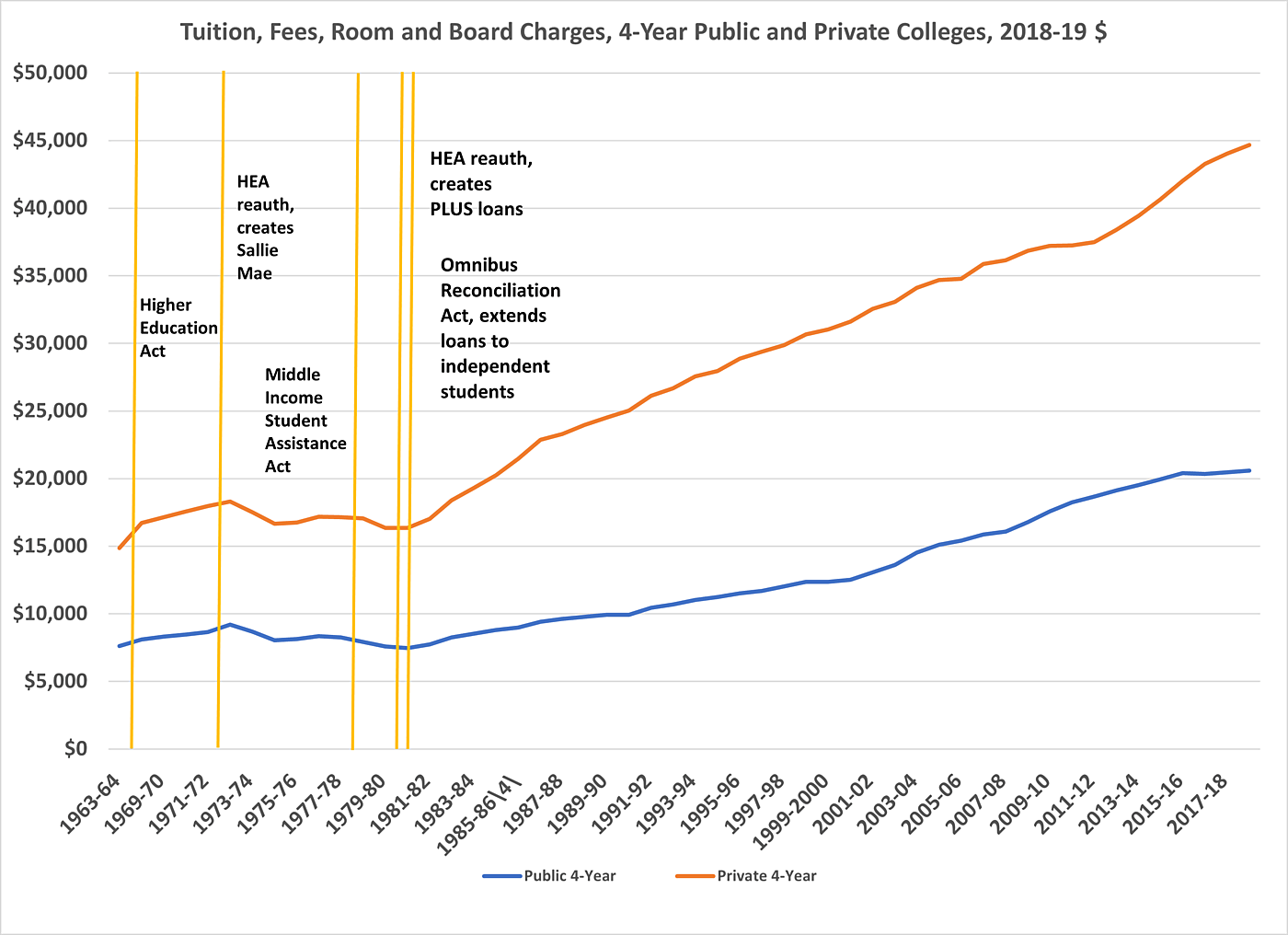 But we got a lot of additional, powerful learning out of this, right?

Wrong. We got a lot more degrees. But not all credentials are created equal.

We have two national assessments of adult literacy that we can break down by educational attainment, and both show declining average literacy for degree holders as degree‐​attainment rose. The National Assessment of Adult Literacy, conducted in 1992 and 2003, found both “prose” and “document” literacy dropping substantially for holders of four‐​year and advanced‐​degrees, and the Program for the International Assessment of Adult Competencies, administered in 2012/14 and 2017, also found falling literacy (though not statistically significant) among people with more than a high school education. And as the chart below shows — taken from this report — earnings for all higher education attainment levels dropped between 2000 and 2018. 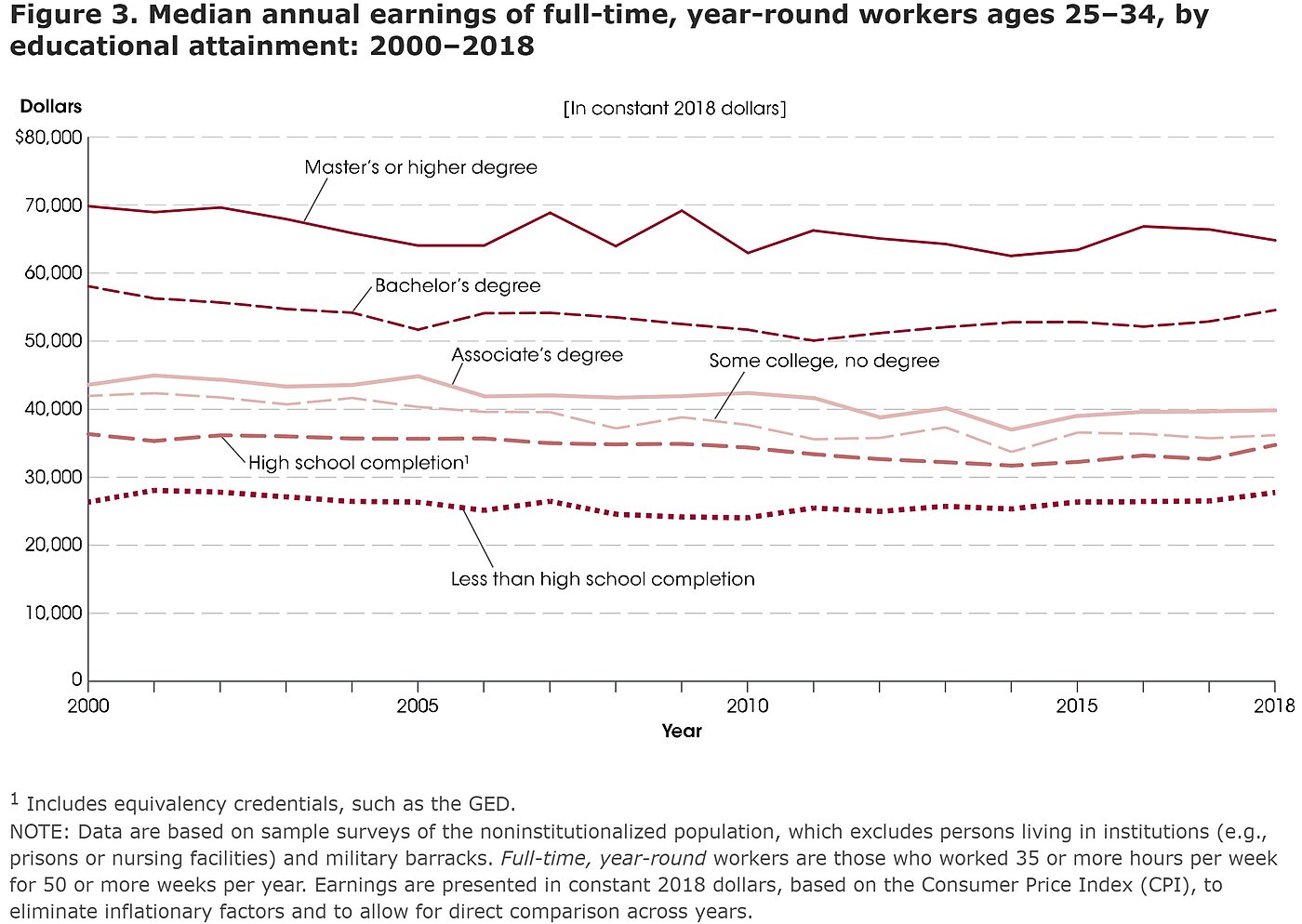 Added to these pieces of evidence, we have long had about a third of Americans with bachelor’s degrees in careers – not just short‐​term employment – that do not require the credential.

Alas, what government breaks, it often “fixes” by making problems even worse.

Free college would further sever the consumer from the payment, encouraging even more overconsumption and fueling a cycle of even worse credential inflation – needing degrees for jobs that did not previously require them. The push is starting with community college, which is already essentially free: the average Pell Grant of $4,418 more than covers the average community college tuition and fees of $3,377.

Nor surprising, as data from the National Student Clearinghouse show, community colleges – typically two‐​year programs – have six-year completion rates of only about 40 percent. As I wrote about a defense of community colleges by Tom Hanks a few years ago, what the completion data suggest is, like a young Hanks experienced, community colleges may often be places to dabble in education, which is fine on one’s own dime, but not someone else’s. And there is no reason to believe “free” two‐​year colleges are the end goal: that is almost certainly free four‐​year public institutions. 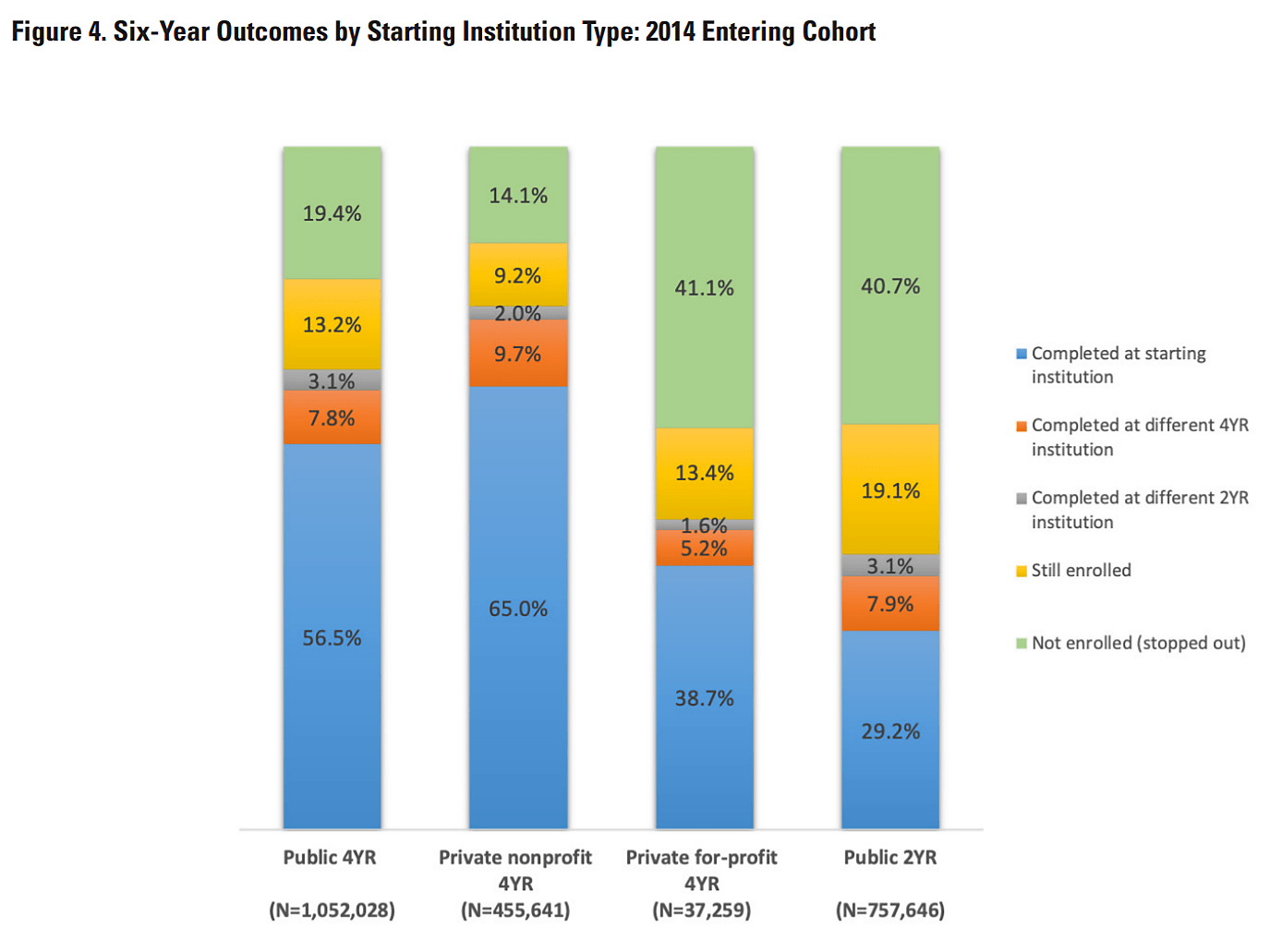 That said, one thing about free college may prevent mass lingering and over‐​creation of degrees: rationing. If demand is goosed beyond what even the federal government might be able to spend, spaces would have to be rationed. As a paper from Jason Delisle and Preston Cooper at the American Enterprise Institute illustrates, at the very least there are tradeoffs between how much government funds colleges, the levels of resources those schools have, and how many people can attend.

Also, as bloated as America’s ivory tower is, ours is almost certainly the best in the world because, unlike most other countries, we primarily fund students instead of schools, and leave institutions a lot of autonomy to innovate and compete. England moved to our model over the last couple of decades, and wouldn’t you know it, the top ten universities in the world are all in the U.S. or England (granted, as rated by a publication in London).

The Biden proposals seem to be premised on one idea: we do not spend enough money. At the very least, the situation is not at all that simple.

Dionte Dillard talks about his job at the Atlanta Breakfast Club

Wed May 5 , 2021
A: Basically, I manage the front of the house, make sure the machine is always well tuned. It’s funny, because I’ve never really been a big people person. But, for some reason, when you’re in the restaurant, it kind of changes. The way it works in our space, the maître […] 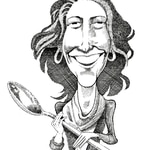