The ocean block of Seaspray Avenue in Palm Beach just saw a sale recorded at $9 million for a house that has barely broken ground on a lot measuring about a quarter acre. Credit-lending executive Robert K. deVeer III and his wife, Colleen, of Greenwich, Connecticut, bought the Midtown property at 165 Seaspray […]

The ocean block of Seaspray Avenue in Palm Beach just saw a sale recorded at $9 million for a house that has barely broken ground on a lot measuring about a quarter acre.

Credit-lending executive Robert K. deVeer III and his wife, Colleen, of Greenwich, Connecticut, bought the Midtown property at 165 Seaspray Ave., according to courthouse records. The lot is the second one east of North County Road, a couple of blocks north of Royal Palm Way.

The property was sold by a Georgia-based limited liability company managed by developer Mary Frances Garrett. She is married to Tom Garrett, the founder and CEO of Atlanta-based GPS Hospitality, which owns Burger King, Popeyes and Pizza Hut restaurant franchises in about a dozen states.

Mary Frances Garrett sold the house through her real estate company, M2B Properties LLC. The company’s initials stand for “meant to be,” she said Tuesday.

In November, her company won approval from the Architectural Commission for the design of the six-bedroom house, which, when finished, will have 5,560 square feet of living space, inside and out. The property will also have a separate guesthouse.

Construction could be completed by April 2022, according to the sales listing placed by agent Elizabeth DeWoody of Compass Florida. The property was listed at $12 million as a “pre-construction opportunity” a few days after the project won town approval. The property landed under contract April 2, according to the MLS, and the deal closed April 26. The deed was recorded May 7.

The house was designed with a first-floor master bedroom, a two-car garage, an elevator and a pool with a whirlpool spa among its features.

Representing the buyers were agents Jack Elkins and Bunny Hiatt of William Raveis South Florida. Elkins declined to discuss the transaction and said his clients also had no comment.

Robert K. deVeer III, known as Kipp, is a partner at Ares Management Corp. He also is CEO of Ares Capital Corp. and heads Ares Credit Group in New York City. That business-development and equity-financing company is one of the largest direct lenders in the country, according to its website. Colleen deVeer co-founded The Greenwich International Film Festival and serves as its director of programming, its website shows.

Mary Frances Garrett will serve as the owners’ representative in shepherding the project through construction, she said. It’s her first Palm Beach residential project, she added, although she has visited the island many times and plans to build a custom home for her family here.

“I asked myself: ‘Where can I build homes that will hold their value and continue to appreciate?’” she said about her decision to build in town.

Garrett’s company bought the Seaspray Avenue lot vacant in June for a recorded $3.67 million from Palm Beach restaurateur Piper Quinn, who was represented by agents Todd and Frances Peter of Sotheby’s International Realty. DeWoody acted on behalf of M2B Properties.

Garrett’s company owns a North End property at 256 Mockingbird Trail, which changed hands in September for a recorded $3.195 million, courthouse records show. DeWoody and agent Bill Yahn of the Corcoran Group were on the buyer’s side of that sale. The house was co-listed by Corcoran agents Dana Koch and Paulette Koch of Corcoran for seller Curtis D. Emmer.

Palmer is designing a house for that lot, and Garrett is eyeing two other properties for development, she said.

Darrell Hofheinz writes about real estate in his weekly “Beyond the Hedges” column. He welcomes news items about Palm Beach real estate for this column. Email [email protected], call 820-3831 or tweet @PBDN_Hofheinz.

Wed May 12 , 2021
Make that reading nook you’ve had in mind come to life with this cool home-design app. This easy-to-use platform gives you 2D and 3D plans of your ideas so you can see exactly what you’re working towards. This results in fewer mishaps (like clashing patterns) and, ultimately, cost savings. Keep […] 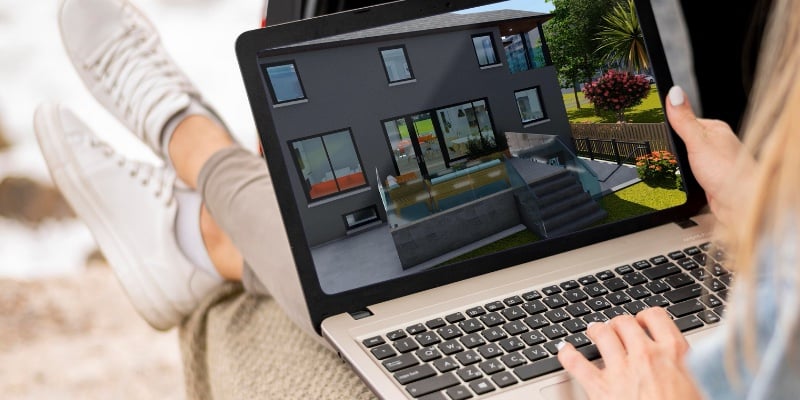