What if your house could respond to a rupture in one of its structural beams by simply repairing itself, or bridges could patch up their own cracks the moment they appear? As fanciful as it sounds, there is a growing field of research dedicated to so-called “living materials” that might […]

What if your house could respond to a rupture in one of its structural beams by simply repairing itself, or bridges could patch up their own cracks the moment they appear? As fanciful as it sounds, there is a growing field of research dedicated to so-called “living materials” that might one day allow for such functionality. A new example out of Imperial College London applies this type of thinking to tiny 3D building blocks that can repair their own damage.

One area of living material research where we are seeing quite a bit of activity concerns concrete, with studies demonstrating how bacteria can be embedded in the material and respond to water damage by germinating and producing limestone or special glues that fill cracks. Another initiative has even seen the creation of a “biological apartment,” where samples of living materials will be swapped in and out to see how they perform.

“The challenge is to mimic and combine the distinct features biology has to offer,” says Dr Patrick Rose from the US Office of Naval Research Global London, which helped fund the new study. “We are not only trying to emulate those systems, but engineer biology to have additional features that are more amenable to the needs we seek without direct intervention. Ultimately, we want to increase the lifetime of a product, prevent failures of systems before the problem is visible to the naked eye and have the material think for itself.”

The authors of the new study set out to develop engineered living materials (ELMs) that can repair their own damage through a biologically inspired sense and respond system. This would build on earlier work from the group on similar materials that could detect changes around them, by developing versions that could take on a more active role and serve as versatile building blocks for a range of purposes.

This started with bacteria called Komagataeibacter rhaeticus, which were genetically engineered to produce fluorescent cell cultures shaped like a sphere, aptly named spheroids. These 3D spheroids can then be arranged into shapes and patterns just like building blocks, and the team put their self-repairing abilities to the test in a naturally occurring structural material called bacterial cellulose.

Bacterial cellulose is a scaffold-like material that is synthesized by some bacteria and has wide-ranging potential in a number of industries, finding use in high-strength paper, filters in speakers and in medical care as wound dressing. The scientists punched holes in a thick layer of bacterial cellulose and then planted their spheroids in the voids. After three days of incubation, the spheroids repaired the damage and restored the consistency and appearance of the original material.

“By placing the spheroids into the damaged area and incubating the cultures, the blocks were able to both sense the damage and regrow the material to repair it,” says Ellis.

The scientists imagine one day integrating the spheroids into building materials to give them the ability to repair themselves. This could lead to windshields that fix their own cracks, aircrafts that repair their own fuselages or potholes that seal themselves in the road. Such a future is a long ways off, but the scientists are working toward it by fusing their spheroids with materials like sponges, wood and cotton. The more short-term applications for the technology, however, lie in the medical field.

“Our discovery opens a new approach where grown materials can be used as modules with different functions like in construction. We are currently working on hosting other living organisms within the spheroids that can live together with the cellulose-producing bacteria,” says first author Dr Joaquin Caro-Astorga. “The possible living materials that can come from this are diverse: for example, with yeast cells that secrete medically-relevant proteins, we could generate wound-healing films where hormones and enzymes are produced by a bandage to improve skin repair.”

The research was published in the journal Nature Communications.

Wed Aug 25 , 2021
The headline in the Miami Metropolis on June 3, 1910, read “An Old Landmark About to Become a Memory” which was referencing the end of the store building on Brickell Point. The structure was constructed by William Brickell and others in 1871 and served as a trading post for the […] 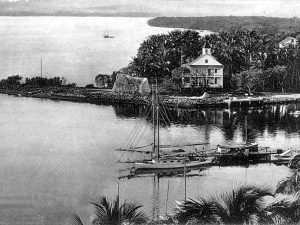