The remodel of Jovita and Alex Honor’s Arroyo Grande house began with an accident. A water leak in 2018 turned a section of their deeply-hued Saltillo tile floor a ghastly white. Unable to find matching replacement tiles, they scrapped the idea of patching and took the leap into a full-scale […]

The remodel of Jovita and Alex Honor’s Arroyo Grande house began with an accident.

A water leak in 2018 turned a section of their deeply-hued Saltillo tile floor a ghastly white. Unable to find matching replacement tiles, they scrapped the idea of patching and took the leap into a full-scale remodel.

“We weren’t planning on remodeling until 2026, but we were going to need to move walls and we didn’t want to replace the floors twice,” Jovita Honor explained.

2026 is their target for retiring from their Silicon Valley jobs and moving to Arroyo Grande.

The couple bought the house in 2016. Currently, Jovita Honor’s parents live there and the Honors visit frequently.

From the start, they knew the early 1990s-built home would need a major remodel.

A style makeover was in order, but their primary goal was to create a multi-generational space that would accommodate both couples as well as visiting family.

The project, which took place January through September 2019, completely revamped the kitchen and updated every bathroom.

The dining room, once situated in an awkward alcove, is now part of the great room and is large enough for 12 diners.

The former dining room alcove became an office that doubles as a guest bedroom.

Although the kitchen footprint shrunk slightly, it functions better because it “uses every space much more efficiently,” Honor said.

Knowing her extended family would frequently cook together, Honor worked with Lovato to incorporate hardworking features such as a 48-inch range top with a double griddle and pot filler.

An oversized sink has two faucets and a cutting board accessory. Smart storage, such as built-in trash and recycling, keep floors and countertops clear.

Their first design choice for the kitchen informed the style direction of the entire house.

The couple had wanted a high-end tile set in a fan motif for their master bathroom. But when budget constraints put a halt to that idea, they decided to use a smaller portion of it for their backsplash.

Its blue color is now the primary accent hue in their otherwise light and bright home.

Blue was a good choice, Lovato said, because of how it complements the new engineered acacia wood flooring.

The tile’s fan motif influenced Art Deco accents throughout the house, including geometric patterns in the custom front doors and wainscoting.

“We decided to build on that,” said Lovato, adding that the understated Art Deco look utilizes “clean modern lines and tones.”

Chandeliers add sparkle to several rooms including the kitchen and dining room.

Wallpaper by Kravet brings elegance to the bathrooms — featuring a dramatic gold for the powder room and a more subdued, moisture-resistant vinyl wallpaper for the guest bath.

The expanding scope of the project came with an expanding budget which initially caught Honor, a financial advisor, off guard.

“I think I’ve been watching way too many home remodel shows where everything looks quick, easy and inexpensive,” she said. But the end result has convinced her of the value of the home remodel, and the couple has even started revamping the home’s exterior.

They now look at remodeling as an investment in their “forever home,” Honor said. “We’ve put our stamp on it. Now it’s really become our home.”

Embrace wallpaper. Wallpaper is a fun way to add texture, color and pattern to a room. Vinyl wallpaper can even be used in high-moisture spaces such as bathrooms. And you can put the scrapers away; many of today’s wallpapers are removable and won’t damage your drywall if you decide to part ways with it later.

Modern art deco. For an updated art deco style, focus on bold shapes and patterns, but ditch the kitschy colors. An updated, simple color palette brings this look into the 21st century.

Sink smarts. If you frequently have multiple cooks, avoid pileups at the sink with more than one faucet. An oversized sink with two faucets allows for two people to prep or clean simultaneously. A pot filler next to the range eliminates the need to carry large pots to and from the sink.

Fri Jul 16 , 2021
Thrifty shopper gives her bathroom a modern makeover with a new $25 Kmart buy – but can you spot why many say there’s a flaw in the design? An Australian woman transformed her bathroom with stick-on tiles from Kmart She covered the walls and shower backsplash with $25 Adhesive 3D […] 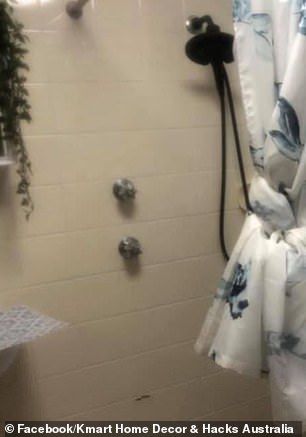