“Flip or Flop” stars Tarek El Moussa and Christina Haack are known for their California coastal style, but in their latest flip, they take a page from Chip and Joanna Gaines of “Fixer Upper” fame and try their hand at modern farmhouse instead. In the Season 11 episode “Smelly Time […]

“Flip or Flop” stars Tarek El Moussa and Christina Haack are known for their California coastal style, but in their latest flip, they take a page from Chip and Joanna Gaines of “Fixer Upper” fame and try their hand at modern farmhouse instead.

In the Season 11 episode “Smelly Time Capsule,” El Moussa and Haack buy a four-bedroom, 2.5-bathroom home in Whittier, CA, for $525,000. The house smells terrible and looks even worse, so this flipping duo will need to work hard to bring this house into the 21st century.

Here’s how El Moussa and Haack pull this budget-friendly modern farmhouse style together, which might inspire some similar upgrades around your own abode, too.

Save money by painting exterior brick

From the outside, this house is dingy: The roof needs to be replaced, and the red brick makes the home look dark and unwelcoming. At first, Haack wants to cover the brick with some siding, but changes her mind when she finds out it’ll cost at least $4,000. So she explores other options.

Watch: Christina Haack Is Ready to Flip Her Home, Turn Over a New Leaf

“We shouldn’t leave it that red color,” Haack says. “Maybe we just paint the brick white.”

So Haack and El Moussa agree to simply paint the exterior brick, giving the outside of this house a simple, clean look.

When the paint is finished, the house looks perfect. The painted brick definitely has a modern farmhouse style, which complements Haack’s interior design. Plus, it saves a good chunk of change, proving that a cheaper option doesn’t have to feel like a compromise.

Haack wants to give this home a modern farmhouse makeover, but she realizes that a farmhouse kitchen won’t be complete without the right sink.

“When you go with modern farmhouse, one of those dinky sinks is not really cutting it,” Haack says.

The only problem? El Moussa isn’t sure they should spend the extra couple hundred dollars on a special sink. He eventually agrees, and when the kitchen is finished, Haack is thrilled with the look. El Moussa, not so much.

“The best part of this kitchen is the upgraded sink,” Haack says.

Haack has another trick to bring the look together.

“So we’re doing that whole, like, rustic modern farmhouse look,” Haack tells El Moussa. “What do you think about adding a couple of beams?”

She spends $600 on two dark-brown faux beams and $400 on installation. All in, that’s only $1,000 for a feature that adds a ton of farmhouse charm to the house.

While buyers love natural light, El Moussa and Haack make the tough choice to remove a window in the master bath. Missing this window changes the whole look of this bathroom, but El Moussa and Haack know how to compensate for the lack of light: white tile.

“We have a big bathroom, but we got rid of the natural light so it’s a little bit dark,” El Moussa says. “So I think we should go a little bit lighter.”

They choose the white version of their kitchen backsplash tile. This white tile makes the whole bathroom look big and open—so it’s unlikely buyers would miss the window.

When El Moussa and Haack go into the backyard for the first time, they’re unimpressed. The pool needs new plaster, but El Moussa doesn’t want to spend the extra money on new tile around the rim. He wants to simply clean the tile, but Haack points out that the tile has faded after years in the sun.

“It was once blue and brown, and now it’s basically white,” Haack says of the once-colorful tile.

The new tile and plaster costs $10,000, but it’s worth it to transform an old yard into a colorful oasis. Plus, it serves as a great reminder that outdoor furniture, decor, and even tiles can fade in the sun. Keeping a sun-soaked yard looking fresh may cost a pretty penny, but it will impress your buyers and guests.

Is this house a flip or flop?

It’s a big profit, and both Haack and El Moussa are thrilled. Maybe they should try the modern farmhouse look more often!

Wed May 19 , 2021
Bathrooms are highly personal spaces in a home and considerable thought goes into making sure they serve functional objectives and meet aesthetic goals during the design phase. As one of the most important rooms in a home, a bathroom needs to be practical and user-friendly as well as visually appealing […] 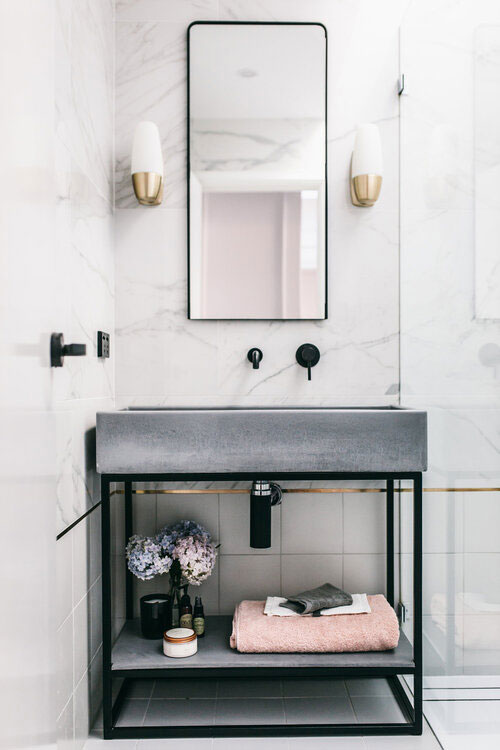