The discovery indicates indigenous usage of land dating many thousands of years ago By James RoseLocal Journalism Initiative Reporter In 2018, Eagle Ranch Resort began the development of its now complete Headwaters Lodge and Cabins. Before the development could start however, a building permit from the Shuswap Indian Band was […]

In 2018, Eagle Ranch Resort began the development of its now complete Headwaters Lodge and Cabins. Before the development could start however, a building permit from the Shuswap Indian Band was needed. Eagle Ranch Resort resides on Shuswap reserve land. Conditional to the issuance by the band of a building permit was a third party archaeological assessment. The proposed development overlapped with a known archaeological site.

Cranbrook based Core Heritage Consulting (Core), a regional firm specializing in indigenous archaeological work, was contracted to do extensive testing. Core’s aim was to better understand the portion of the site that the proposed development would permanently destroy.

“We did a thorough assessment [in 2018] to better understand the part of the site that was to be disturbed by the then-proposed development before its destruction,” Brett Watson said. Watson is a permit-holding archaeologist in BC’s sub-arctic boreal and interior plateau regions with fifteen years experience. In 2017, he founded Core which now employs four archaeologists.

Fast forward to spring 2021. After completing the accommodation portion of Headwaters, next on Eagle Ranch’s to-do list for the new development was exterior beautification (landscaping). Core was brought back to do further monitoring of areas not assessed in 2018.

Through the course of monitoring, Watson and his team began carefully controlled excavations within an intact portion of the known archaeological site. The excavations were conducted in stratigraphically controlled 1m x 1m units. Detailed records of all findings were carefully recorded.

The preliminary results of the excavation units surprised Watson. They found something. “Beyond a shadow of a doubt, we confirmed the suspected cultural depression to be the remains of an indigenous habitation feature or pit house,” Watson said. What’s a cultural depression? According to Core’s online glossary, a cultural depression is the general term for any pit or depression created by humans. These may include house pits, cooking or roasting pits, and cache pits where food or other items were stored. 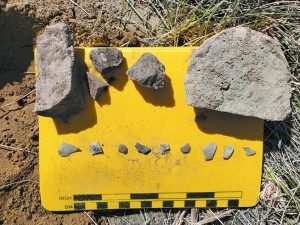 Cooking stones and lithic debitage found within the archaeology site.

Watson is quick to point out that the site’s existence has been known for a while. “It was first recorded in 1977,” Watson said. “There’s been a number of studies conducted on it since with varying degrees of professionalism and expertise.” Despite the work that was done, Watson maintains it was not very well understood.

In the case of the Eagle Ranch discovery, what Watson and his team found was a cultural depression habitation feature, a semi-subterranean dwelling or more simply: someone’s home. “As of now, we have limited evidence that this was built thousands of years ago, though it’s likely,” Watson said. “We came down on a hearth or a fireplace that would’ve been used for cooking and heating.”

As to exactly how long ago this feature was first built, right now it is impossible to say. “We have carbon samples, we just need to send them off for dating,” Watson said. A carbon dating study would reveal with much greater clarity the feature’s origination date. But those kinds of studies take more time and money. “Based on the material types discovered and the stratigraphy observed, the site was likely utilized for thousands of years,” explained Watson.

“What we’ve found speaks to a very long time depth of usage of these lands by indigenous people,” Watson said. For context, there is archaeological evidence in the East Kootenays of indigenous usage going back 13,000 years.

Of particular interest and surprise to Watson was the absence of a berm around the depression’s rim in the cultural depression’s immediate vicinity. Logically, if you dig a hole for a future dwelling, nearby there should be evidence of the dig. The dirt has to go somewhere. The absence of a locatable berm suggests to Watson the material was swept away through the sands of time. And this begs the question, top of Watson’s mind: If there is no geological/geographical berm evidence for this particular site, then how many other sites in the Columbia Valley are going unnoticed for the same reason?

The location of the find is also telling. That’s because it is situated in such a way to afford the habitant(s) the same spectacular views of the Columbia Valley we all value today. Some things never change.

Was the site used just once and subsequently forgotten? The evidence suggests not. “We uncovered multiple material types that indicate the dwelling was occupied multiple times over thousands of years,” Watson said. Another point of interest is how close the site is to the salmon beds, which experts know were utilized frequently in prehistory. Scholars define prehistory as events that occurred before the existence of written records in a given culture or society.

Looking ahead, Watson hopes to continue doing further analysis of the site. Using the term “site” however, is not the best descriptor. To Watson, the discovery of the cultural depression is only one small part of something more substantial. “Rather than an isolated site, this discovery is the tip of an archaeological iceberg that represents a landscape of thousands of years of past and present human lives.”

An archaeological landscape that now features a distinct clue to humanity’s distant past. “Our involvement was the result of proactive stewardship from Sierra Stump and the rest of the Shuswap Band administration, with cooperation from Eagle Ranch Resort,” Watson said.

An important public reminder from Core Heritage Consulting: Should you find anything on a known or unknown site, the best thing to do is take a photo or GPS point and let a local First Nation or archaeologist know. In other words, whatever you do, do not remove whatever it is you’ve found. In archaeology, context is everything.

Street of Dreams-inspired patio ideas: ‘Even a small space can be a luxurious extension of your home’

Sat Aug 14 , 2021
If you want to enhance your patio entertaining, the 2021 NW Natural Street of Dreams luxury home tour in Happy Valley through Aug. 22 has al fresco spaces, big and small, designed for dining and get-togethers. With a ticket ($20), Street of Dreams tour goers will see ideas by the […] 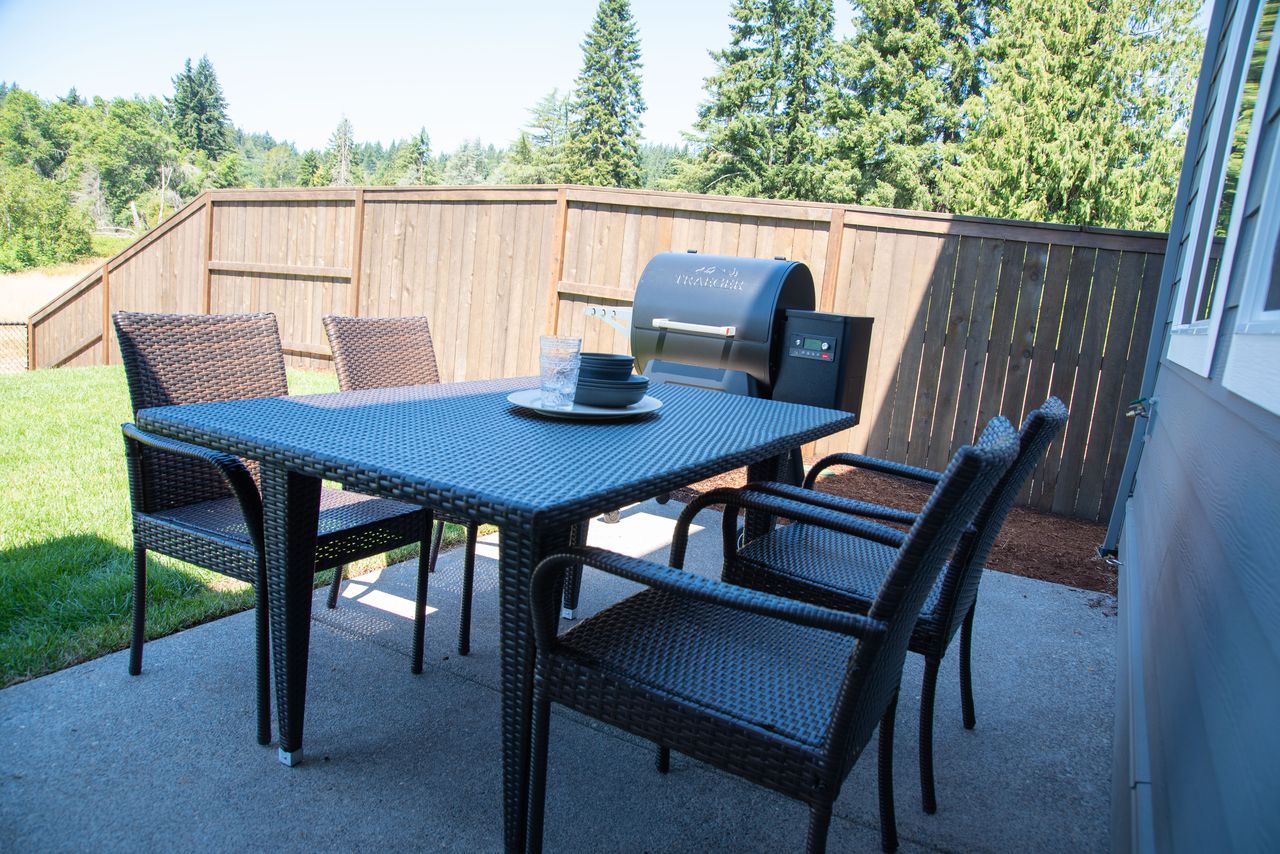